Turkey is a large, rapidly developing country with a domestic consumer market of 80 million people. Over the last decade Turkey has been aligning its regulations in anticipation of eventual EU membership, and its existing Customs Union with the EU currently offers significant opportunities for UK companies across a broad range of sectors.

Turkey is big – with an area of 300,950 Mi2. It borders Greece, Bulgaria, Armenia, Georgia, Iran, Iraq and Syria with easy land and sea access to the Gulf States, Near East and North Africa. As a result there are opportunities for collaboration with Turkish companies to do business in third markets such as Central Asia and South Caucasus.

Benefits for UK businesses exporting to Turkey include:

Contact a Department for International Trade (DIT) export adviser at: https://www.contactus.trade.gov.uk/enquiry/topic for a free consultation if you are interested in exporting to Turkey.

Turkey is a transcontinental country lying between latitudes 35° and 43° N, and longitudes 25° and 45° E. It has cultural connections to ancient Greek, Persian, Roman, Byzantine and Ottoman Empires and with a geographical location straddling both Europe and Asia and providing a hub for access to regional markets in the Middle East, Central Asia and the South Caucasus, it is a key destination for UK and European trade and investment.

97% of the country lies in Asia and 3% in Europe, separated by the Bosphorus, the Sea of Marmara and the Dardanelles, a body of water joining the Mediterranean Sea to the south and the Black Sea to the north and with the ancient city of Istanbul – Turkey’s cultural and commercial centre – on the European side.

The largest part of the country, in Asia, is comprised mostly of the hot and dry high central plateau of Anatolia and includes the capital city, Ankara. To the east are the Armenian Highlands which include Mount Ararat, Turkey’s highest mountain at 5,137 m (16,854 ft) and the source of a number of rivers, including the Tigris and Euphrates which flow south through the northern plains of Upper Mesopotamia in the southeast of the country. 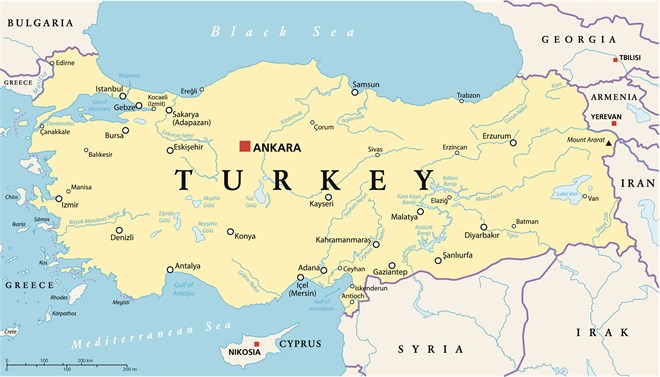 Turkey is a secular democracy with a majority Muslim population. Its Head of State is President Recep Tayyip Erdoğan, who won 52% of the vote in Turkey’s first direct presidential elections in August 2014. Prior to his election as president, Erdoğan served as Prime Minister and leader of the Justice and Development Party (AKP), a centre-right party with Islamist roots.

The AKP, which has been in power since 2002, won a new mandate with 49.5% of the vote in November 2015 – after a brief period of hung parliament. Three other parties are represented in parliament: the centre left CHP (134 seats); Kurdish-focused HDP (59 seats) and the nationalist MHP (40 seats).

The Turkish Government is pursuing a strategy of infrastructure development, reform and constitutional change.

The Kurdistan Worker’s Party (PKK), a proscribed terrorist organisation, abandoned its two year ceasefire in July 2015. The PKK continues to launch attacks in Turkey, particularly in the southeast of the country.

The attempted coup on 15th July 2016 killed 241 and injured more than two thousand. The government subsequently declared a State of Emergency which remains in effect.

The UK continues to encourage human rights reforms in Turkey to ensure that democratic and justice standards as set out in international law are met. Turkey is a signatory to the European Convention on Human Rights (ECHR) and in order to become an EU candidate country, Turkey has to meet the EU political criteria.

The UK supports bilateral projects in partnership with Turkish Government institutions and civil society that aim to strengthen rule of law and rights protections.

The European Commission’s most recent progress report for Turkey noted that Turkey and the EU had developed their co-operation in a number of areas, but it described backsliding in some areas of fundamental freedoms.

Following the 2001 economic crisis, Turkey undertook major structural change in the finance sector, which, coupled with subsequent economic and political stability, led to an average growth rate of 5% between 2002 and 2014. In 2015 and 2016, the Turkish economy grew by 4% and 2.9%.

The bulk of Turkey’s economy is made up of a diversified services sector including real estate, tourism, financial services, education and health. Industry continues to play an important role, particularly in manufacturing which accounts for a large proportion of Turkish exports to Europe in the form of household goods e.g. BEKO and Vestel.

The Turkish Government aims to decrease Turkey’s import dependency in its growth and export structure, while increasing its capabilities to become an exporter of high-technology products.

Turkey is also an important energy transit country and aims to become a European energy transit hub. Turkey has the capacity to transport 121 million tons of oil to the world markets per year, typically from the Middle East and Caspian to EU markets. This is roughly 3% of annual global oil consumption. It plans to increase its energy capacity with new pipelines and the opening of a Southern Gas Corridor for Caspian and Middle Eastern gas which would also allow for gas exports to reach the EU.

The top-ten industries importing into Turkey are:

The International Trade Centre (ITC) ranks the value of Turkey’s top services imports. You can read more about what Turkey imports at World’s Top Exports: http://www.worldstopexports.com/turkeys-top-10-imports/.

The Strategic Partnership signed by the UK and Turkish Prime Ministers in July 2010 cements the UK’s commitment to deepening the bilateral relationship.

There are many existing business links between the UK and Turkey. Over 2,500 UK companies are currently operating in Turkey including global companies such as BP, Shell, Vodafone, Unilever, BAE, HSBC, Aviva and Diageo.

Strengths of the Turkish market

Strengths of the Turkish market include:

Top UK exports to Turkey include:

Contact a Department for International Trade (DIT) export adviser at: https://www.contactus.trade.gov.uk/enquiry/topic for a free consultation if you are interested in exporting to Turkey.