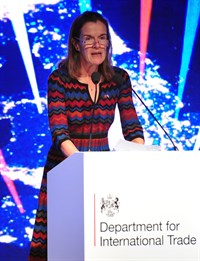 I am delighted to contribute to this guide to “Doing Business in Turkey”. Turkey is a dynamic market and a country with which the UK enjoys a close political and economic relationship. Turkey has faced both political and economic challenges in the last few years (most notably the attempted coup in July 2016). However, throughout these upheavals the UK has remained a vital trading partner and political ally. This has further cemented the relationship, which has in turn helped to open up new prospects for collaboration, partnering and mutually beneficial business. These opportunities exist in Turkey, the wider region and beyond, where UK and Turkish businesses (often with UK Export Finance – UKEF support) are working together successfully on major projects.

There is a continuous two-way flow of high level engagement from the Prime Minister and President down. This has resulted in some notable successes in recent times, including the selection of BAE Systems as the strategic design partner with Turkish Aerospace Industries (TAI) for the indigenous fighter jet project (TFX). This was important not just because of the potential size of the project but also because it ushered in a new and unprecedented level of government-to-government co-operation.

That approach (of government working closely with business to facilitate success in major projects) has helped to break down long- standing anxieties on the Turkish side about the willingness of the UK (companies and Government) to engage in meaningful technology transfer.  The new bond of trust is helping to open doors well beyond the defence sector and coupled with the continuing strong political partnership, is providing UK businesses with a real boost in the Turkish market.

No consideration of the prospects for doing business can be complete today without touching on the subject of Brexit. Turkey is a special case in respect of our current trading relationship and will need particular attention in the transition to a post-Brexit world. This is because Turkey is in its own customs union with the EU, which impacts on the nature and scale of the future relationship we can negotiate with each other.

Both the UK and Turkey are clear that the aim must be to secure, to the extent possible, a seamless transition to the new relationship with little or no disruption to trade. This is important for both economies – not least as the UK is currently Turkey’s 2nd most important export market. Work is underway to ensure that the transition, and any new arrangements, will help to facilitate and grow trade in the future, as efficiently and painlessly as possible.

There will be challenges to face for any business looking to work in Turkey. The economy still has some difficult structural issues to address and there will always be stiff competition from domestic and international suppliers, but I am confident that UK businesses (with the right support) can continue to succeed here. This guide, used in parallel with what DIT (and our commercial partner in Turkey, The British Chamber of Commerce in Turkey – BCCT) offers, will be a great aid to those companies developing a strategy to trade and invest successfully in Turkey.